All my life, I’ve been something of a candy aficionado. A connoisseur, a junk food junkie, if you will. I recently came across a Facebook post where one of my friends had proclaimed Skittles to be the best fruit-flavored candy. Some friends agreed, others dissented, offering up other crowd favorites, like Starburst, Runts, Mike & Ike, etc. I was about to chime in with my choice: I like Skittles–no, I like Tropical Skittles, in the blue pack. The red pack flavors are okay, if not a little mundane, but the Tropical flavors are just a little better.

I like sweet candies. The sweeter, the better. As a kid, I ate any and all candies–sweet, sour, whatever, because hey, it was candy. Sour stuff like SweeTarts and Lemonheads, or spicy stuff like Red Hots or Hot Tamales were not my favorites, but I ate ’em, because hey, it was candy. Nowadays, I guess I gravitate toward the tropical flavors because they generally are sweeter and mellower than their original counterparts. You got your pineapples, your coconuts, your mangoes, and so on. Sometimes, they’ll throw in banana, or passion fruit, or kiwi (the only non-sweet tropical fruit, in my opinion), but pineapple, coconut and mango are the core three. Whenever I ate a pack of Runts, which wasn’t too often, I’d save the bananas for last. They were the sweetest! Some people would throw the bananas out. Those people are known as fools.

Over the past couple months, I’ve been tracking down and sampling as many tropical candies as I could get my hands on, and I came across all my favorites, as well as some I never knew existed. To wit:

The aforementioned Tropical Skittles. Like with most packs of candy with lots of different flavors, I have to eat them according to their colors. I’m not one of those savages who just pours out a handful and crams it into my maw. There are many flavors for a reason. They must be savored. I’m not too keen on the green kiwi limes, but I still eat them. I save the yellow banana berrys for last.

Tropical Starburst are okay, nothing too exciting going on here. They are infinitely more edible than the original flavors, which have become more and more tangy over the years. Piña colada is the standout here.

Mike & Ike Tropical Typhoon contains not just one, but two different “punch” flavors. According to the graphic on the right of the box, Caribbean Punch is pineapple/mango/lime, while Paradise Punch is pineapple/strawberry/kiwi. Sure it is. Anyway, even though there’s also two banana-blended flavors here, the mango flavor goes the hardest. Just plain ol’ mango.

These? Are Tropical Chewy Lemonheads. Found these at the Dollar Tree. I didn’t know there was such a thing as chewy Lemonheads, let alone a tropical version of them. As you can see by the pic, they pair a lot of sweet flavors with not-so-sweet ones. I’m not quite sure how pairing pink lemonade with uh, yellow lemonade makes it a “tropical” flavor. These were all kinda meh. Moving on.

I’m staunchly anti-sour everything, but my daughter convinced me that if I’m gonna do a true sampling of every tropical candy, then I have to try these too. She likes sour stuff, and she assured me that Sour Patch Kids are only sour for the first couple of chews. I found these to be surprisingly tolerable. This one also has a Paradise Punch, and an ambiguous flavor called Tropical Twist. The passion fruit kids are the sour-then-sweetest to me, though. 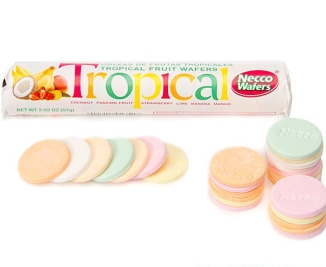 Yes, I’m one of those freaks who likes Necco wafers. I even eat the clove and licorice wafers. So when I came across these tropical Necco wafers, I snatched them right up. And maybe it’s just me, but these actually have a smoother, almost creamy texture to them. Coconut, banana, mango, passion fruit, and er, strawberry are the flavors. I can’t pick a fave; they are all delicious.

Mamba Tropics? I just found these today, believe it or not. These are similar to Japan’s Hi-Chew, though not quite as chewy. They’re too new for me to pick a favorite, but Pineapple-Coconut (aka Piña Colada) were the ones I opened first.

I couldn’t find any tropical Life Savers, or the tropical mix of Hi-Chew flavors (pineapple, kiwi, mango). I also couldn’t find one of my all-time favorite candies: Sunsations. Mainly because, they don’t make them anymore. Sunsations were hard candy disks; they were essentially the tropical version of Spree. They were so good. And they are no more.

You’re probably wondering: since I like tropical fruit-flavored candy, do I like the real-life fruits themselves? Well, sure! I’ve been known to eat actual food from time to time, and I love banana, melon, mango, and pineapple. I don’t like actual coconut; never cared for the texture. And kiwi fruit in its natural form is far too tart for me to tolerate; it’d be stomach-ache city.

So, keep your “original” fruits. When it comes to candy, you’ll always find my taste buds closer to the equator.